Categories
Pages
Home » History of Japan » Things to do: Have your dinner blessed by a Koyasan monk »

Things to do: Have your dinner blessed by a Koyasan monk

Posted on Sep 18, 2013 in History of Japan, Japanese customs, Stories about Japan, Things to do, Where to eat | 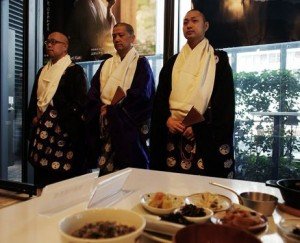 Monks from Koyasan in Wakayama Prefecture attend the opening of Koyasan Cafe, a religious and culinary event in Tokyo continuing until Sept.8 at the Shin-Marunouchi Building across from Tokyo Station.

Monks have taken over the menus at restaurants in the posh Shin-Marunouchi building in Tokyo to offer real soul food.

Throughout the weeklong Koyasan Cafe event, diners can fill their stomachs and their spirits with Buddhist-inspired dishes.

Koyasan Cafe takes its name from the spiritual center of Japanese Buddhism, Koyasan in Wakayama Prefecture. Also known as Mount Koya, it is the last resting place of the eighth-century monk Kukai, the headquarters of the Shingon sect he founded and, as of 2004, a UNESCO World Heritage site.

Nankai Railway brought the event to Tokyo six years ago, aiming to attract visitors and pilgrims to Koyasan.

The participating monks also hope to deliver some of the values from their holy mountain to busy urban dwellers who have come to take the dining experience for granted.

“ ‘Shojin ryori‘ doesn’t simply mean abstaining from meat and fish,” for religious or health reasons, says Hogen Yabu, one of the monks. “Behind it is the concept of striving to bring oneself to higher enlightenment.”

Nine restaurants and bars in the Shin-Marunouchi Building, located opposite Tokyo Station, are involved in the project. In addition to the food, there are chanting performances, meditation lessons and opportunities to sit down and ask questions directly to the monks.

Among the eateries are Henry Good Seven, So Tired, Tiki Bar Tokyo and Rigoletto Wine and Bar. But don’t be surprised that their names don’t exactly hint at Buddhist ascetic. Each place has gone to town with its own version of Japanese shojin ryori, once simple but now elaborate meals forgoing meat and based around vegetables and tofu. Henry Good Seven for example offers chilled cappellini with yuzu and fruit tomatoes; So Tired offers Chinese-style sweet-and-sour “pork” (made from soybeans); while Tiki Bar Tokyo presents shojin tacos and terrine made from tomatoes, cucumbers and kanten (agar-agar) gelatin. Then there are desserts such as a blancmange of mango, kiwi, kanten and soy milk available at the European-inspired Japanese restaurant Sawamura. Altogether there are 35 original shojin ryori dishes to savor.

It all sounds tempting, but eating the bare minimum is one of the first lessons that the monks hope to teach.

“So much food goes to waste these days,” Yabu says. “We want Japanese to re-examine what it really means when they say ‘itadakimasu’ (‘I receive humbly’) before eating a meal–to show gratitude to the food itself by controlling your passions and taking just enough.”

For details and schedule see the official website at (http://www.nankaikoya.jp/cafe).