Categories
Pages
Home » Stories about Japan » What to read: Geisha of Gion by Mineko Iwasaki »

What to read: Geisha of Gion by Mineko Iwasaki 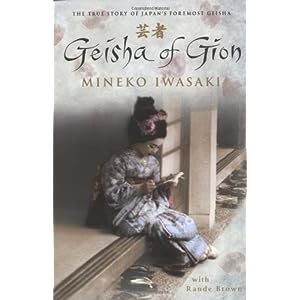 This book is a real page turner!

Mineko Iwasaki was the foremost geisha of her time, to the extent where she became a legend and was invited to entertain the highest levels of world society. When Arthur Golden wrote his novel, Memoirs of a Geisha, he consulted with Mineko but was apparently sworn to silence. Unfortunately, he then went on to tell people that it was Mineko who had spoken with him about the life of geisha in Japan; Mineko herself was upset that he had twisted what she said and as a result chose to write this book, her own memoirs, to explain to the world what geisha really are, what they do, and her own life story (much of which Golden borrowed for his own book).

I read Memoirs of a Geisha a long time ago, but I remember enjoying it thoroughly when I did. I was later dismayed to learn that Golden’s story wasn’t nearly so close to the truth as I’d imagined and that in fact he got a number of things wrong. (Yes, I have always been picky about historical fiction). I’d heard about Mineko Iwasaki writing her own book, and wanted to read it, but for some reason never actively sought it out. Then I saw it on the shelf in a charity shop and I was reminded that I really did want to read it and learn something a little closer to the truth than was portrayed in Golden’s book.

This isn’t the best written memoir I’ve ever read; Mineko Iwasaki has a ghost writer, Rande Brown, helping and presumably transforming her story into better English, but she definitely maintains a distance throughout and the book is very simple in tone. The story she has to tell, however, is far from simple and is completely engrossing. I did have the sense that Mineko purposely picked and chose which episodes to relate in order to emphasize certain facts about geisha (she splits them into two groups, maiko and geiko) which she knew that Golden got wrong or deliberately changed, but that didn’t lessen my interest in the memoir as a whole.

Sometimes, however, I had trouble believing what she’d said. For example, she first says that men rarely got very far into the okiya, the house in which a family of geisha lived. There were prescribed hours men were allowed in, and she uses this to argue that geisha are most certainly not prostitutes. But shortly afterwards she relates the fact that her older sister did bring men into the house and allowed them to sleep over, that she ran into them in the bathroom, and then was nearly raped by her own nephew in that same house. If men could not enter the house, why were these men permitted in?

She also begins the book when she is three years old and ascribes to herself adult thoughts and sayings. I couldn’t believe that a five year old child made the decision on her own to become a geiko, which led me to believe that in fact her parents were willing to sell her like they’d sold her sisters – all of whom became very bitter. Mineko seems like a much more driven and responsible girl, and since she did end up happy with her life, I wonder if she’s forgiven her parents and thus portrayed them in a much kinder light than she might otherwise have done. It is possible that at five she decided she wanted to be a geisha, but I would think her parents had a greater role in such a choice than either she knew or wanted to disclose.

Saying those things, I did thoroughly enjoy this memoir even if I took a few of her memories with a grain of salt. I knew little about the life of geisha and I was happy to be educated. Mineko is something of a rock star; she was the foremost geisha until she abruptly retired in the middle of her career, sick of the rules and restrictions that she couldn’t manage to change. She was so popular that no less than seventy other geisha retired within a few months of her, to pay her respect; she wanted to make changes, not endanger the profession, which is what may have ended up happening after her retirement.

As always, it was the little details that thoroughly captivated me. The clothes Mineko wore – backed up by the amazing photographs in which she looks astonishingly like a painting – the life she lived, the few skills she had as a normal human being. No one ever taught her any conception of money, for example, until she was in her twenties, so she worked constantly knowing she had to support the okiya but without any real conception of how much she was earning or how much money could buy certain things.

Despite my reservations, this was a truly fascinating book. I wish more geisha would write memoirs so I could compare and get a little closer to the truth, but for now, I would definitely recommend Geisha of Gion.