Where to go: Shinjuku Golden Gai, After7 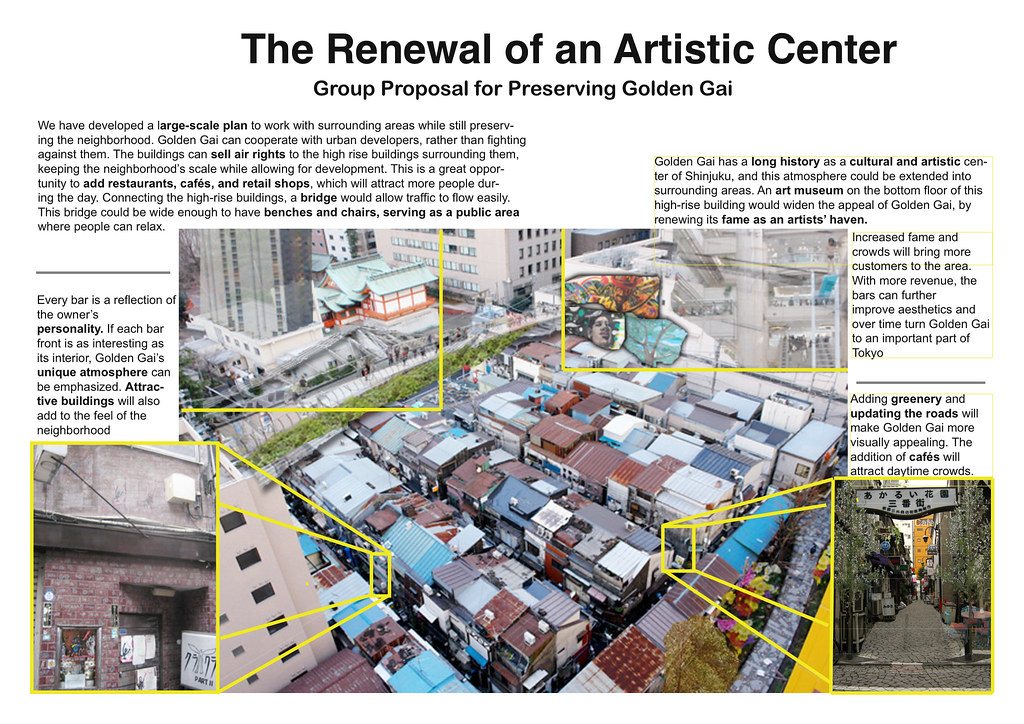 Shinjuku Golden Gai (新宿ゴールデン街) is a small area of Shinjuku, Tokyo, Japan, famous both as an area of architectural interest and for its nightlife. It is composed of a network of six narrow alleys, connected by even narrower passageways which are just about wide enough for a single person to pass through. Over 200 tiny shanty-style bars, clubs and eateries are squeezed into this area.

Golden Gai was known for prostitution before 1958, when prostitution became illegal. Since then it has developed as a drinking area, and at least some of the bars can trace their origins back to the 1960s. In the 1980s, many buildings in Tokyo were set on fire by Yakuza, so the land could be bought up by developers, but Golden Gai survived because some of its supporters took turns to guard the area at night.

Golden Gai is a few minutes walk from the East Exit of Shinjuku Station, between the Shinjuku City Office and the Hanazono Shrine. Its architectural importance is that it provides a view into the relatively recent past of Tokyo, when large parts of the city resembled present-day Golden Gai, particularly in terms of the extremely narrow lanes and the tiny two-storey buildings. Nowadays, most of the surrounding area has been redeveloped: The street plans have been changed to create much wider roads and larger building plots, and most of the buildings themselves are now much larger high- or medium-rise developments. This has left Golden Gai as one of a decreasing number of examples of the nature of Tokyo before Japan’s ‘economic miracle‘, that took place in the latter half of the 20th century.

Typically, the buildings are just a few feet wide and are built so close to the ones next door that they nearly touch. Most are two-storey, having a small bar at street level and either another bar or a tiny flat upstairs, reached by a steep set of stairs. None of the bars are very large; some are so small that they can only fit five or so customers at one time.The buildings are generally ramshackle, and the alleys are dimly lit, giving the area a very scruffy and run-down appearance. However, Golden Gai is not a cheap place to drink, and the clientele that it attracts is generally well off.

Shinjuku Golden Street Theatre is a tiny theatre in one corner of Golden Gai that puts on mainly comedy shows.

Bars in Golden Gai are known in particular for the artistic affinities of their patrons. Golden Gai is well known as a meeting place for musicians, artists, directors, writers, academics and actors, including many celebrities.Many of the bars only welcome regular customers, who initially should be introduced by an existing patron, although many others welcome non-regulars, some even making efforts to attract overseas tourists by displaying signs and price lists in English.

Many of the bars have a particular theme, such as jazz, R&B, karaoke, punk rock or flamenco, and their ramshackle walls are sometimes liberally plastered with movie, film and concert posters. Others cater to customers with a particular interest, such as go, exploitation films, or horse racing. Most of the bars don’t open until 9 or 10pm, so the area is very quiet during the day and early evening.

Once a month a special event is hosted in this part of the underbelly of Tokyo. If you really want to experience the real Tokyo I recommend you go to After 7 Bar ni iku. On this night you can buy a special ticket for only  2000 yen. With this card you do not have to pay a cover charge and can enter at least 10 different bars in the Golden Gai area. A friend of mine has been there a few times and he highly recommends it. Forget Roppongi where all the foreigners go to party. Instead experience the ‘real Tokyo’ and go to Golden Gai. The next one is scheduled for tomorrow so be quick and get your ticket now!

For more information and ordering a ticket, please go to: (website is in Japanese)
– http://peatix.com/event/13472/view

Where to go in Golden Gai

Once you are in Golden Gai, you are wondering where to go. Here is an overview of the best bars to visit in this lively area.

With a staggering 200 bars and eateries crammed into a maze of six narrow streets, Shinjuku’s Golden Gai district is one of the more rewarding drinking destinations in central Tokyo — if you’re feeling adventurous, that is.

Sandwiched between Shinjuku Ward Office and Hanazono Shrine, a short walk from the East Exit of Shinjuku Station, this collection of ramshackle buildings has resisted development since World War II, leaving it a mysterious and compelling hangout for musicians, filmmakers, artists and booze-hounds alike.

Be warned, however — Golden Gai is not cheap. Prices are almost universally high and most bars will sting you with a seating charge.

Some will even turn you away outright, preferring to save their limited seating for regular customers. But, there are plenty of bars in the area that will give you a warm welcome, especially those with younger owners.

Also, look out for the Nouryou Kansha-sai festival that’s held every August, when the more progressive watering holes throw open their doors to newcomers and drop their cover charges. Well, that’s the theory anyway.

In the meantime, while there’s no definitive best-of list laying bare Golden Gai’s many unique and charming establishments, here’s a selection that we particularly love.

“This isn’t a titty bar!” howls the barmaid at Square, anxious that we might mistake the mammary-minded conversation of the young lads at the counter for shop policy. And indeed it’s not — though there’s plenty of cheeky fun to be had nonetheless.

The fetish-wear that lines the walls and the signed posters of female pro wrestlers go some way to suggest a well-meaning spirit of deviance imbuing this otherwise perfectly normal little boozer, where pop monsters such as Lady Gaga, Kylie Minogue, Britney Spears and Michael Jackson play (not too loudly) over the stereo.

It’s not a gay bar, either, but it does seem to attract LBG and trans-whatever clientele alongside the “straighties.” To put it another way — at Square, you’ll feel welcome whoever you are.

Run by “Abe-chan,” a world music nut in his mid-40s who also writes about Korean pop for a Japanese magazine, Asyl is a haven for lovers of Desi beats, Algerian hip-hop, bhangra, K-pop and some even broader musical ephemera.

Although it’s cluttered with bottles and stacks of CDs (that give the place natural character) and is only about the size of a small walk-in closet, Asyl still manages to squeeze in seats for half a dozen customers.

Autographs adorn the walls (including those of a Korean rapper and “Noel and Liam Gallagher,” though Abe says the latter were actually scribbled by a couple of visiting Mancunian pranksters), and the boss’s warm sense of humor quickly spreads to the friendly clientele. As with many Golden Gai bars, you’ll make new drinking pals easily at Asyl.

With seating on three floors, Albatross G is a sprawling pub — by Golden Gai standards, at least.

It’s barely a couple of meters wide, yet somehow fits two tables, as well as an engraved dark-wood counter on its ground floor, with another bar on the second floor and a sort of balcony on the third, to which the bartender underneath passes up drinks with outstretched arms.

Set in a deep red hue, the place certainly gives the impression of thrift-shop splendor. The ceilings are crowded with fake chandeliers, the walls mingling crucifixes with stuffed animal heads and mirrors in ornate frames.

And indeed, this is an ideal den for the indie-rock crowd, with a cooler-than-thou soundtrack and occasional art exhibitions on the thrid floor to boot. The staff can be a bit on the surly side, and your cover charge gets you the tiniest bowl of popcorn you’ll ever see in your life, but hey — that’s all part of its charm.

Bar Plastic Model is a shrine to the plasticized culture of the 1980s, from the toys that adorn its counter (a couple of Rubik’s Cubes, which owner Kei Sekine can solve in front of your eyes, and a bunch of Gundam and Urusei Yatsura figures) to the mass-market cartoon heroes of the period (such as Doraemon, whose visage graces the spirits tumblers).

And then there’s the extensive selection of lovingly preserved records that line the bar itself, taking in new-wave, punk, hardcore and old-school anime themes and spun on a full DJ setup complete with oversized amp.

Bar Plastic Model counts among its regulars renegade videogame director Suda51, who even featured the bar in his game “No More Heroes.”

With its white concrete walls and counter, the real Bar Plastic Model is one of the brighter joints in Golden Gai — and neither as synthetic, nor as disposable as its name suggests.

A good bar-crawl often ends in hospitalization — so why not combine the two with a visit to Tachibana Shinsatsushitsu (“Tachibana examination room”)? One of Golden Gai’s stranger haunts, this tiny second-floor establishment is in thrall to all things medical.

Its walls are festooned with biology diagrams, its counter littered with model skulls and skeletons, a real pickled baby rodent in a vial, and a gigantic silicon statue of a penis that sways cheerfully when nudged.

A barmaid in a nurse’s uniform fixes drinks in glass beakers while the food is served in metal kidney dishes.

Original cocktails include the appealingly named Chounai Senjou (“colonic irrigation”), a shochu-base drink with a stick of sour dried apricot designed to look like a turd, and Kanchou (“enema”), a sticky-sweet blend of gin, cherry-blossom liqueur and an energy drink.

The bar has just one table, which you’ll share with the other customers — much like an operating theater, when you think about it. Oh, and there’s a ¥5,000 penalty if you fall asleep, though quite frankly, we’d be more worried that a snooze would result in having our organs harvested. Drink safe.