Got hay fever? No fear, the new ‘Pollen Robo’ is here!

For several years, Weather forecaster Weathernews Inc. has deployed a special robot at this time of the year to help Japan’s hay fever sufferers better navigate the pollen season.

The new Pollen Robo designed for this year will be capable of collecting data on not only pollen, but also on PM2.5 particulate matter and yellow sand that blows across the sea from China.

The company is dispatching 1,000 units across the country.

Hay fever sufferers will be able to access the information online in real time, allowing them to know where the levels are highest and plan their days accordingly.

Weathernews said pollen levels started climbing in the Kanto region (the Kanto region is where Tokyo is located)  from late January, and will greatly increase from around mid-February.

The amount of airborne pollen is expected to climb by 10 percent this year from an average year.

The spherical Pollen Robo measures 15 centimeters in diameter and has human facial features such as eyes, nose and a mouth. The eye color also changes according to the amount of pollen it detects. 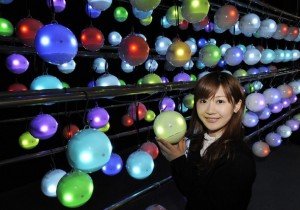