Categories
Pages
Home » Must see » The next olympic sport? Synchronized walking, only in Japan »

The next olympic sport? Synchronized walking, only in Japan

The video of a 47-year-old tradition at Japan’s Nippon Sports Science University went viral in November last year. ‘Shuudan koudou’, which means ‘Collective Action’, is a unique routine where a group of students put up an amazing display of synchronized walking.

On November 14, 77 students performed before a crowd of 11,000 people at the university’s festivities. Their walking routine was similar to military movement exercises or synchronized marching band movements. But they were far more intricate and precise. Watch the video, and you’ll know just how precise. Seriously, the way they move is simply mind-blowing. 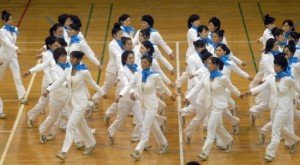 Prior to the program, the students practiced three days a week, for five months straight. Their training included exercises to get them in shape for the dazzling display. They ended up walking almost 1,200 kilometers during practice (roughly the distance between Paris and Rome).

23-year-old Keiko Suzuki, the captain of the team, said: “People say Japanese youngsters these days lack the ability to work collectively in a group, but we just proved that we don’t.” She also said that the training would give them an edge in their job search. “We all mastered this highly disciplined training and made it our habit to stick to strict rules. I believe this experience will be an asset as we enter into the job market.”

Synchronized movements are embedded deep into Japan’s culture. In Japanese schools, morning assemblies have students standing equidistant from each other. The NSSU group movement is a very popular tradition. It is almost like the western equivalent of cheerleading. The complicated routines have been practiced since 1966, and the very first exhibition by female students happened in 2011.

NSSU is famous for producing Olympic gold medalists, sumo wrestlers, and surprisingly, politicians. Many of its graduates go on to work as Physical Education teachers, trainers and coaches. The annual festival is meant to be a display of the students’ athletic prowess.